Glaucoma market to grow to $3.5 billion by 2030, driven by launch of new pipeline products, says GlobalData

According to the leading data and analytics company’s latest report ‘Glaucoma – Global Drug Forecast and Market Analysis to 2030’ the US will experience the fastest growth, with a CAGR of 2.7%, while the 5EU will experience growth of 0.2% and Japan will decline by 0.9%. The company notes that the main driver of global growth will be the launch of its seven pipeline products, primarily its sustained-release (SR) implants.

Sultan Ahmed, PhD, Pharma Analyst at GlobalData, comments: “Glaucoma is the leading cause of irreversible vision loss worldwide. In most cases, glaucoma is chronic with open-angle glaucoma (OAG) being the most typical form accounting for 90% of all cases. All forms of glaucoma are characterized by the loss of the retinal ganglion cells (RGCs) and their axons that make up the optic nerve, which results in a cupping of the optic nerve head leading to vision loss. Raised intraocular pressure (IOP) is the primary risk factor for glaucoma, and due to this, non-surgical treatment regimens work to lower IOP to stop disease progression.” 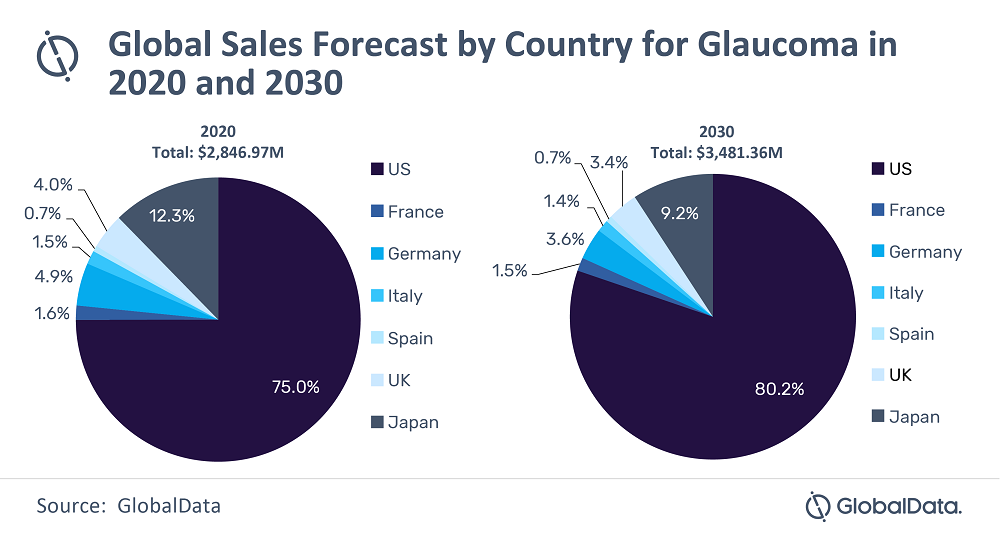 Many pharmaceutical companies, in recent years, have focused on developing products outside of the conventional classes for glaucoma treatment to provide a new mechanism of action (MOA) to reduce IOP that can be utilized adjunctively to existing treatments. Examples are Rho kinase inhibitors (RKIs), which have generated a lot of interest in recent years, as well as small-interfering RNA (bamosiran) and LRRK2-targeting (h-1337) products that are currently in the pipeline.

Ahmed continues: “However, glaucoma is an established indication, with large numbers of treatments that have become available over the years. This includes prostaglandin analogues (PGAs) which remain as the first-line of treatment due to their superior efficacy, safety, and inexpensive cost because of the large number of generics available. Due to this, it is unlikely that a new treatment class will overtake PGAs over the forecast period due to the highly competitive nature of the market.”

The mature nature of the glaucoma market means there is a low level of unmet need with the disease, however, one of these needs is that patients often do not adhere to the complex treatment regimens, with many individuals often requiring multiple drops a day. As a result, pharmaceutical companies now also look to work on the reformulation of existing PGA products into SR implants, with two currently in late-phase development. These are Ocular Therapeutix’s otx-tp and ViSci Ltd’s latanoprost SR. SR implants would prove to be significantly beneficial, allowing many patients to be treated with their required drops for a period of three to six months.

Ahmed concludes: “Other novel pipeline drugs in late-stage development include Nicox SA’s ncx-470 and Santen Pharmaceutical’s sepetaprost. Both products function as PGAs, however, possess unique functionalities that may make them a desirable treatment option. Ncx-470 functions as a nitric oxide-donating bimatoprost analog whilst sepetaprost targets prostaglandin E2 receptor and prostaglandin F2 alpha receptor agonist, becoming the first PGA to act on multiple receptors. Therefore, GlobalData anticipates a continued growth of this market, with new treatments and optimized methods of administrations driving this.”